Kilimanjaro marangu route:  Also known as the “Coca Cola route” – the Marangu route is one of the most popular routes leading to the summit of Mount Kilimanjaro. Many hikers believe that the Marangu route is the easiest route to Uhuru peak since it is the only route that can be hiked in 5 days (making it the cheapest option). However, we strongly recommend hiking the route over 6 days to increase your chances of reaching the summit successfully.

Note that this is the only route that provides communal sleeping huts, equipped with beds and mattresses at every overnight site. Some basic goods such as mineral water, beer, and chocolates are also sold at most sites. The Marangu route takes the same route for both ascend and descend. 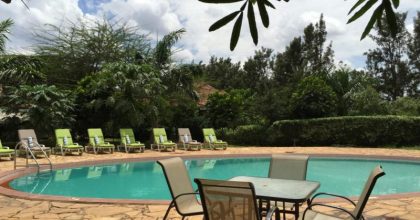 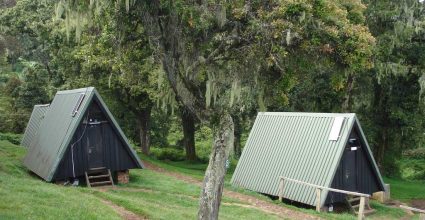 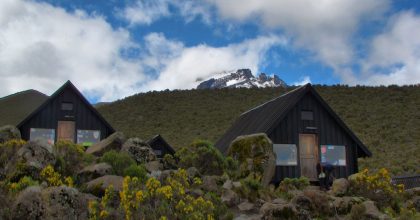 You will be picked up by the staff of Northland Tanzania Safaris from Kilimanjaro International Airport (JRO) and driven to your accommodation in Arusha. Participants will be given a short briefing for the climb the next day. Kits and the necessary equipment will be checked as well. 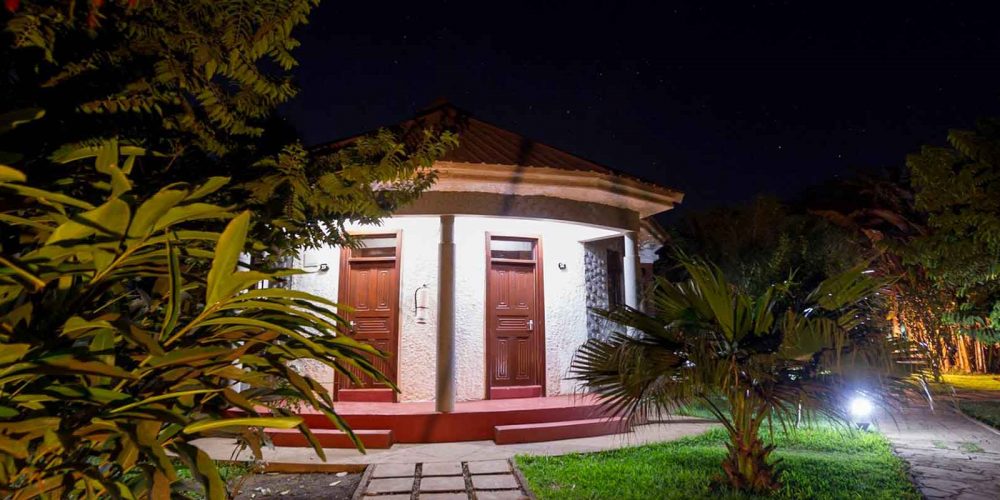 The drive from Moshi to the Kilimanjaro National Park gate takes about 50 minutes. The journey passes through the village of Marangu, which is located on the lower slopes of the mountain. Once you reach the park gate, all hikers are requested to sign in at the Park office and make their final preparations for the climb. Porters will be seen arranging and loading their packs, containing the food, water, cooking gas as well as most of your equipment.

From the park gate, we ascend on a cleared ridge trail through the rain forest where you will see most of Kilimanjaro’s animals. An alternative and more scenic parallel forest trail branches off to the left a few minutes after the gate.

This trail follows the edge of a stream through the undergrowth and offers you the option to rejoin the main trail either after 1.5 hours hiking, or 1 hour before Mandara hut where you will spend the night.

Mandara hut consists of a group of wooden A-framed huts in a forest clearing. Each hut features 6-8 sleeping bunks with solar generated lighting. The total capacity of the camp is 60 climbers. Water is piped into the camp from springs above and there are flush toilets behind the main hut. 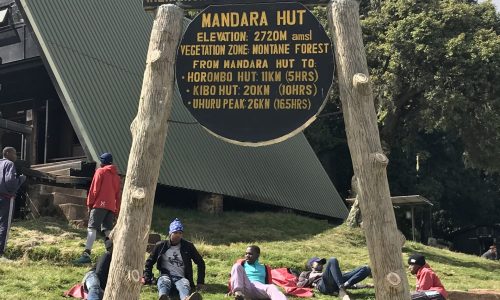 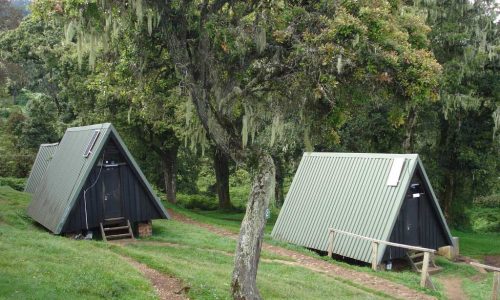 From Mandara hut, the trail passes through a short stretch of forest, skirts the base of the Maundi Crater and then emerges into a transition from rain forest to moorland. It is well worth a short detour to scramble up the rim of the Maundi Crater for your first impressive view of the Kibo Crater. On a clear day, Kibo will glimmer in the distance, with sightings of majestic glaciers in the morning sun.

Once you are in the open moorland, you will get the chance to see some of Kilimanjaro’s most spectacular plants – the endemic giant lobelia which grows up to 3 m in height and the giant groundsel (Senecia Kilimanjari), which can reach heights of 5m. After about 6 hours trek from here, you reach the Horombo hut for your accommodation. 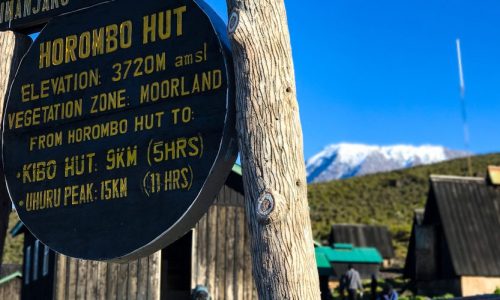 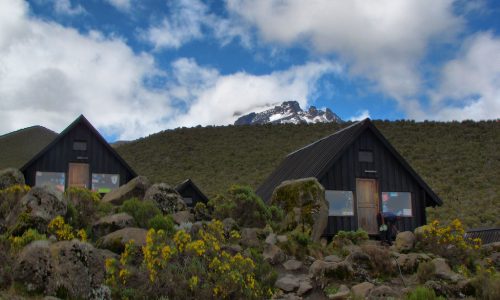 Horombo hut is a village of huts perched on a small plateau, with buildings similar to Mandara with a capacity of 120 climbers! Horombo is normally bustling with hikers, guides and porters, with an atmosphere of adventure and excitement. You will meet both ascending and descending hikers here.

This extra day and night at Horombo is for additional acclimatization. A hike towards the Mawenzi hut, passing the Zebra Rocks on the way (about 3 hours up and 1,5 hours down) is strongly recommended.

After breakfast, we continue our ascent into the Alpine desert habitat. From Horombo, there are two trails to the “Saddle” (which refers to the area located between the peaks of Mawenzi and Kibo). There is an upper route (right hand fork) and lower route (left hand fork) to choose from. The upper route should be very familiar, as you will have climbed most of it the previous day towards Mawenzi hut. This section is very stony and eroded.

The recommended lower route (left hand fork) is much easier and nearly an hour shorter, and it also passes the last watering point at 4130m. You will have to fill your water bottles with all the water you will need until your return to Horombo hut in two night’s time (unless you are willing to buy Mineral water at Kibo hut).

Situated in the barren Alpine desert is Kibo hut, a stone build block house which has bunk beds for 60 climbers, but no streams with water nearby. It is however possible to buy mineral water and soft drinks at the camp office. There are platform toilets behind the hut.

The summit is now a further 1195m up and you will make your final ascent the same night. Prepare your equipment, ski-stick and thermal clothing for your summit bid. This should include the replacement of your headlamp and camera batteries and make sure you have a spare set available as well. To prevent freezing, it will be wise to carry your water in a thermal flask. 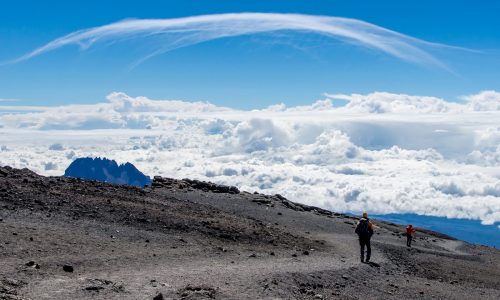 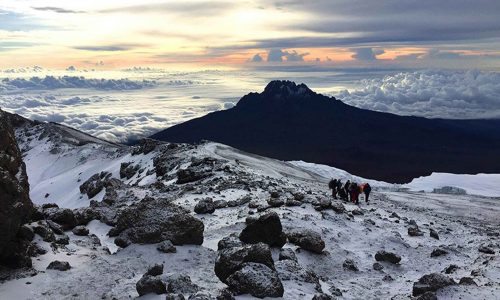 You will rise around 23h20, and after some tea and biscuits you shuffle off into the night, and this is where the going really gets tough. The first section of the trail consists of a rocky path to the Hans Meyer Cave (5150m) and also offers a good resting spot. The path then zigzags up to Gillman’s point (5 681m), which is located on the crater rim. This section is very steep with a lot of stone scree, requiring great physical and mental effort. This is probably the most demanding section of the entire route. Do the Kili shuffle and move slowly.

From Gillmans Point, you will normally encounter snow all the way up to Uhuru peak (5895m), the highest point in Africa. Weather conditions on the summit will determine how long you will be able to spend, taking photographs, before the 3-hour descent back to Kibo hut. After a short rest, you gather all your gear you left behind for the ascent and head down to Horombo hut (3 hours) for your overnight.

The return to Horombo hut will seem surprisingly fast compared to the ascent. The total time spent walking on this day is around 14 hours, so be prepared for a very tough day. Later in the evening, you will have your last dinner on the mountain and have your well-earned sleep. 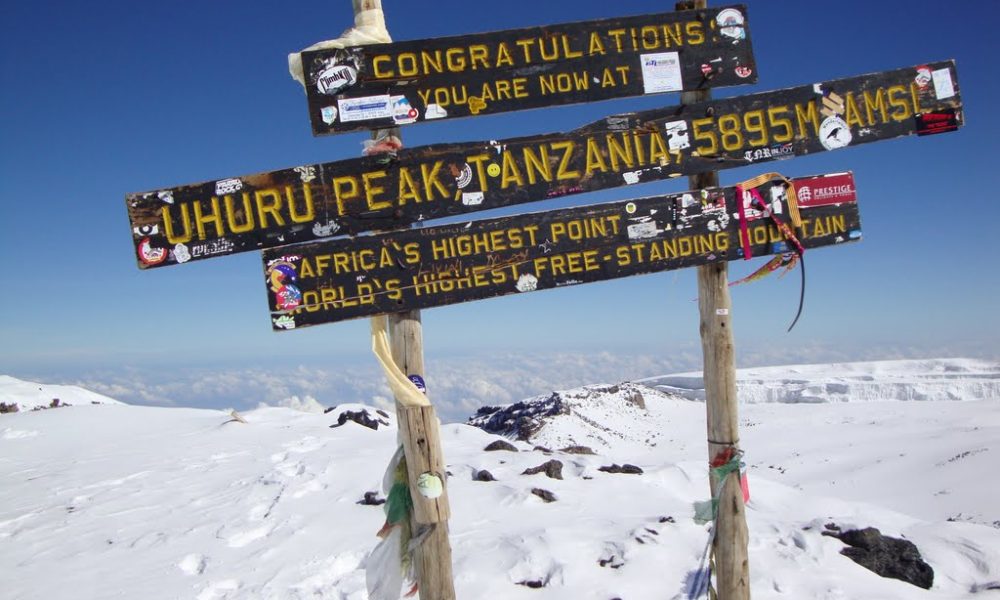 After breakfast, you continue your descent (6 hours), passing the Mandara hut, down to the Marangu gate. At Marangu gate, you will receive your summit certificates. Those climbers who reached Gillman’s Point (5685m) are issued with green certificates and those who reached Uhuru Peak (5895m), receive gold certificates. You now drive back to Moshi/ Arusha for a long overdue hot shower, dinner and celebration. 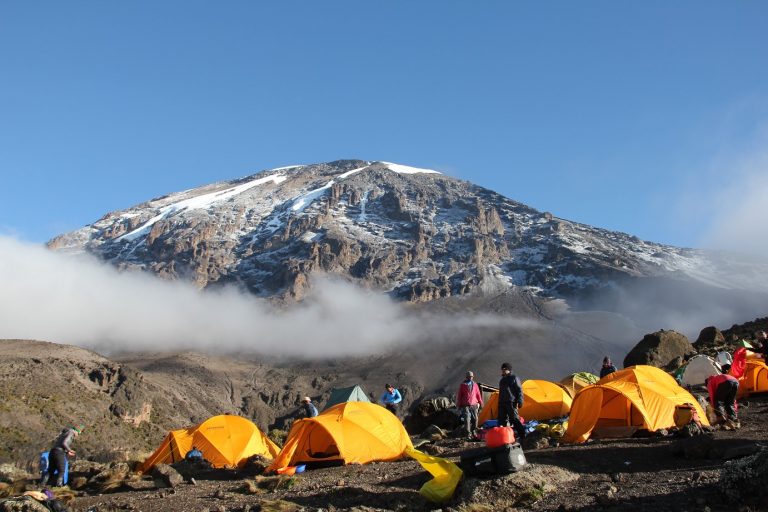 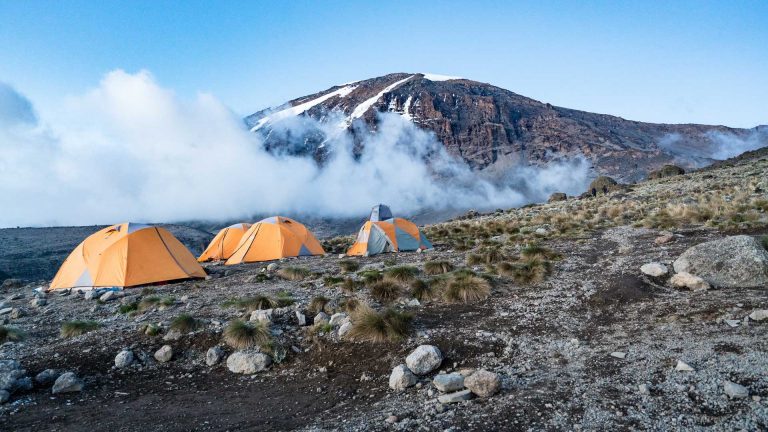 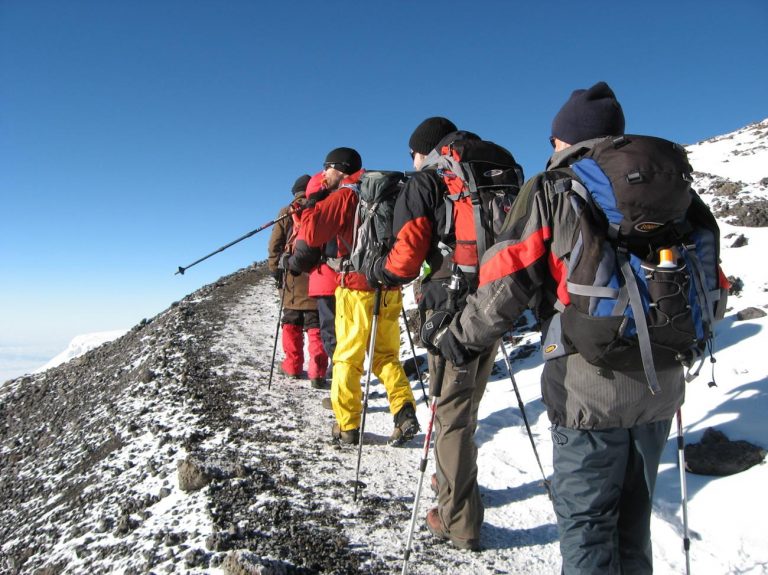 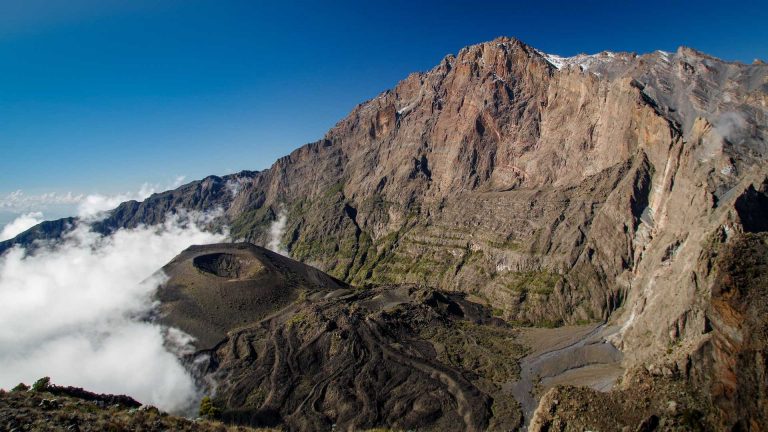