Africa’s easiest and most accessible gorilla trekking is the main draw card of a Rwandan safari. After arriving at the capital city of Kigali, you are only a few hours’ drive away from the legendary Volcanoes National Park and its habituated but still wild gorilla families.

It was on the bamboo-covered slopes of Rwanda’s Virunga Volcanoes that the late Dian Fossey studied the behaviour of the endangered mountain gorilla for 20 years, followed by the filmmakers who shot Gorillas in the Mist. Now small groups of privileged visitors can experience one of the most memorable wildlife encounters on earth – gorilla trekking through the pristine Virungas rainforest.

Rarely experienced in isolation, a Rwandan gorilla safari combines well with other East African destinations in Uganda, Kenya or Tanzania but there is more to green and hilly Rwanda than meets the eye: it is also home to the primate-filled Nyungwe Forest National Park where there are chimpanzees and fantastic bird-watching opportunities. Akagera National Park, on the other hand, offers big game viewing in a diverse savannah setting.

Lake Kivu is a gorgeous expanse of water surrounded by Rwanda’s gently rolling slopes – in fact, Rwandans call their home ‘the country of a thousand hills’ because of its undulating landscape. Kivu is a great place to enjoy boating, hiking, kayaking and chimp trekking.

Small, compact and easy to travel around, friendly Rwanda has dealt with its past tragedies and offers intrepid travellers and wildlife enthusiasts what is usually a hard-to-gain insight into Central African cultures, wildlife and environments. Simply browse our range of popular tour itineraries and recommended accommodation or contact one of our African Safari Experts for assistance with planning a tailor-made Rwandan safari.

Rwanda has two wet seasons and two dry seasons, each showing a different side of the African Great Lakes region. In October, November & December, the country sees a short period of rain showers, followed by a dry season from June to September and a longer rainy season during the months of January, February, March, April & May

Rwanda is a dream destination for many, and flying there is very easy thanks to major domestic and international airlines such as Air India, Etihad Airways, Vistara, Air France, Jet Airways, Qatar Airways, etc.

Without a doubt, the number one thing to do in Rwanda is gorilla trekking at Volcanoes National Park. Sharing a border with Uganda and the Democratic Republic of the Congo, this national park in Rwanda is home to a growing number of critically endangered mountain gorillas. Experts estimate that there are about 600 gorillas in the park—a significant increase from around 240-250 individuals in 1981.

It’s hard to imagine that just a couple of decades ago, Rwanda was in the midst of a horrific genocide that would leave more than 800,000 people dead in just 100 days. The country has come a long way from the devastating massacre, but the impact of this relatively recent history has left its mark on the lives of everyday people and generations to come.

Tourists can learn about this horrific event at the Kigali Genocide Memorial. The haunting museum dives into the timeline that led to the 1994 genocide, bringing the horrors to life through halls of photographs, artifacts, and information. The main exhibit hall wraps around poignant sculptures and features stained-glass windows that cast a hopeful glow on the space.

The museum continues with another permanent exhibit on the history of genocide around the world and intervention efforts from international communities, helping to put the Rwandan genocide into context.

If the country’s impassioned conservation efforts don’t convince you that Rwandans have a reverence for animals, a visit to the King’s Palace Museum certainly will. The star attraction at the museum (one of Rwanda’s eight national museums) are the inyambo (sacred cows) and their staggeringly large horns. Throughout the day, traditional singers lull the cows into a mellow state by belting poems—a ritual that’s unique to Rwanda.

The museum itself is just as interesting as the four-legged creatures out back. It showcases a replica of a king’s palace from the 15th century with a thatched roof, royal hut, and fresh milk hut traditionally run by an unmarried woman.

Tourists can also explore the colonial-style home that was once the royal residence of King Mutara III Rudahigwa in the mid 20th century. The interior design is particularly striking, blending Rwandan patterns with European-style furniture (some of which was actually owned by the king). 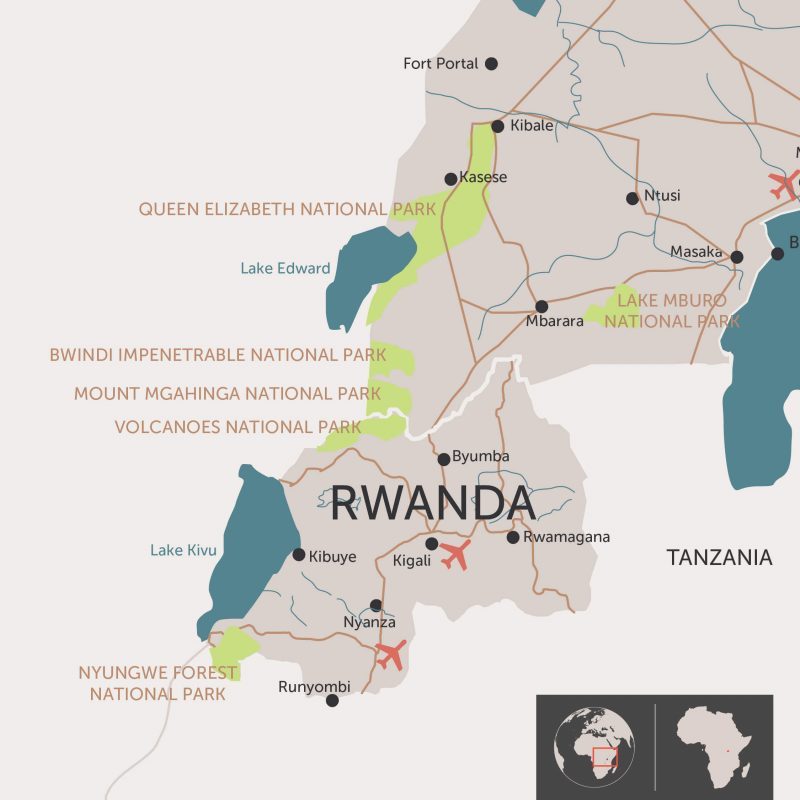